How to Know Per Unit Rate of Electricity in All States of India?

How To Know The Per-Unit Rate Of Electricity In All States Of India? How to Check/ Calculate Per Unit Rate in/of Electricity Bill?: The usage and rate of electricity differ in all states, and several factors lie behind it. But mostly the weather is the leading cause that leads to variation in the usages and rates. The cost of electricity is like a regular expense that we have to incur every month. 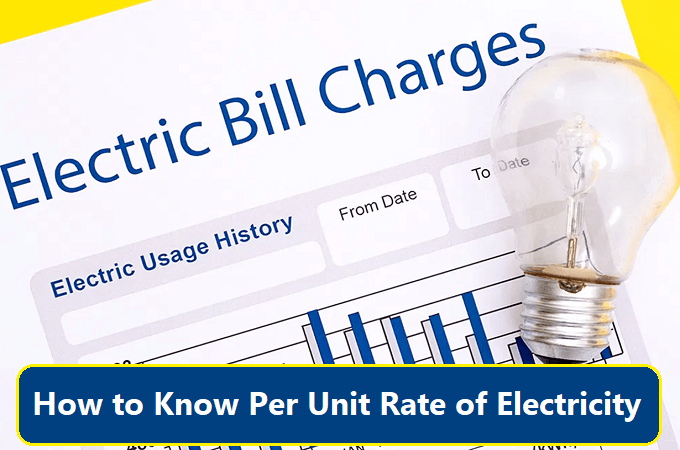 Some areas have higher rates per unit, some have comparatively low rates, but we must know the differences. The higher rates of the electrical units contribute to the increased usage of electricity in the overall state.

Some state electricity ranking sources use their methods, procedure, and equipment to measure and update electricity rates. Read our “How to know the per-unit rate of electricity in all states of India” guide to know in detail the topic.

Also Read: How to Watch IPL Live 2021 in mobile free without Hotstar?

How To Know The Per-Unit Rate Of Electricity In All States Of India?

If you’re wondering about the difference in the rates among the various states and their ranks, we have prepared a detailed analysis of it for you.

The tariff keeps on changing now and then but mainly after a year. We have been able to keep track of it and recorded the latest electricity rate in the states.

How do you find the unit rate of electricity?

When calculating our monthly budget, most of us wonder hard about the unit rate, which often keeps us thinking about the cost of 1 unit of electricity in India. Then here, you’ll find a comprehensive answer to your question.

If you’re interested in calculating the unit rate, here’s the formula that can help you do it. The basic unit of electricity that is used is the Kilowatt-hour. In our simple language, we can calculate it as 1unit is equal to 1kwh.

So if you’re using 1000 watts or 1 kilowatt of electric power for one hour, you’re consuming 1 kilowatt per hour of electricity. Now let’s move on to the charges.

The charges vary from place to place.

Tariff in the States of India mostly goes up to 7.0 to 7.10 per unit for monthly consumption of 101 to 200 units. But the rates are different and higher after the team consumed increases.

When it goes above 200 units, then the per-unit cost increases up to 8.05 to 8.15 rs. Even the unit rates of domestic consumption differ from that of the rates charged for industrial consumption. “how to calculate per unit rate of electricity”

This is how you can measure and calculate the electricity rate in India. Like we have mentioned before, it changes every year. The cost of Electricity per KWH in India 2021 is different in different states. Here we have prepared for you an all-state electricity unit rate 2021 list.

Andhra Pradesh holds the first position on our list. They have divided their rates and charges into three groups, but the monthly payment is fixed at Rs 10 per KW of the sanctioned load per month.

They even have smart meters for consumers who consume more than 500 units in a month. The townships and the colonies there has a different rate of Rs 7 per unit.

Next in our list, we have Assam. There they have a fixed charge of 50 Rs per KW in a month. But it also has many groups and divisions.

For domestic purposes, you need to know if the unit gets above 120 and lies in between 240. They charge 6.15. But below that, the charge is as low as 4.90 rs. But if any of these units are consumed for commercial purposes, the category immediately changes and falls under the commercial variety.

The tariff does not have any hidden cost or tax included in it. Instead, the other forms of tax or duty fees are paid in addition to it. The locals can only use cash or local cheques mostly to pay the amount. But they also accept electronic transfers. “How to Know Per Unit Rate of Electricity in All States of India?”

In Bihar, they have a whole new way of categorizing the per unit charge of electricity. The people who lie under the BPL line have a fixed amount of Rs 10 KW in a month. The energy charge is 6.0 rs per unit.

But the other categories which fall under the rural areas have different rates. Like the other types need to pay Rs 6.70 when they consume units above 100 KW. But the rates below that are comparatively low.

Here domestic consumers can apply for government subsidies. Now they have categorized their rates in a slightly different way. If the consumer uses units of 150, the authority will charge the first 100 units 2.40 rs which falls under the 1 to 100 slab.

But if the consumption is more than 400 units and within 600. crew, the authority will charge 3.50 rs per unit. Units above 601 pay a high rate of 4.8 rs per unit. For the single-phase, they have a fixed charge of 40 rs per month. But for three phases, they charge 120 rs per month. “How to Check/ Calculate Per Unit Rate in/of Electricity Bill?”

In Delhi, the consumer has to pay an electricity duty of 5 percent. So they need to pay an additional 30 percent. Now let’s shift our attention to their per-unit rates.

Every team that consumed more than 801 but less than 120p charges their consumer 7 rs per hour. But the cost is as high as 8 rs per hour if the total unit consumed gets over 1200. These charges are applicable for individual Electricity connections like domestic uses.

Which state has the highest rate of electricity in India?

The weather there remaining high in the day is another significant cause. West Bengal follows Maharashtra in this chart. West Bengal has a rate of 8.0 per unit of electricity.

In which state electricity is the cheapest in India?

It is surprising enough to know that in India, Sikkim has the cheapest electricity rate from the year 2019. But other states like Delhi, Uttarakhand also have decreased in the rates of electricity in recent years.

The prices of the units vary from year to year. In 2017 1.1 is the rate of electricity per unit in Sikkim, and Mizoram 3.75 rs per unit follows the charge of the electricity that the consumers use for domestic purposes. “How to Check/ Calculate Per Unit Rate in/of Electricity Bill?”

Electricity rate in all states per unit in all State-wise

The next place to consider in this chart of Electricity rate in all states per unit in all State-wise is Goa. The surprisingly interesting fact about their charges and per unit rates is that they have two categories for domestic consumers.

One is the w-income group, namely LT-LIG, and the other is for the ones with a stable income, namely LT- D.

The low-income group applies to that consumer who has a sanctioned load of 0.1 KW and is allowed to consume 30 units in a month. For that pays a fixed charge of 50 Rs per Month to the authority. But that’s not the case scenario when it comes to the LT-D group.

They also have various tariffs. For a single-phase pay the police 25 rs per month, and for three phases, they follow 65 rs per month. The per-unit rate varies from 1.50 to 2.25 when the total units consumed increase above 100.

The rates get higher with the increase in the teams that the customer consumes. If it gets above 400, then the speed can be as high as 4.25 rs per unit.

Now that we have provided the detailed analysis of the (“How To Know The Per-Unit Rate Of Electricity In All States Of India? How to Check/ Calculate Per Unit Rate in/of Electricity Bill?”) States that have some significant concerns, we are going to the States the per-unit cost of some other states that you should know.