Best Translation App For Android in The World

Best Translation App For Android In The World – Our world has different human beings who communicate in multiple languages. Study shows more than 7100 type of languages is spoken across the globe.

So it is impossible to understand all communication styles of a single person. 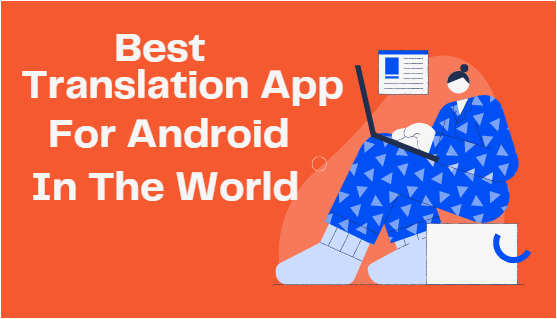 That’s why we help translators convert certain words, voices, and text into our language. There are several Best Translation Apps for android available in the world. However, Google Translate is the most popular and effective language converting app in the market. In this guide, we review the top 12 Translation Apps For Android.

April 2006 was the year when the quick translator launched in the market. Since then, this google product has competed at the top of the table. Developers design a go-to resource mobile software that quickly converts text and audio into your desired language.

Currently, this application is widely used by 500 million users worldwide that’s a reason why we consider this app in Best Translation App For Android.

Besides, the software offers 100+ different language options to choose from. This free application is easy to use and has both online and offline compatibility. Users can also translate images with instant camera translation features.

Microsoft launched this translator app in 2009. Since then, this excellent application has run successfully in the market. Over 70+ languages and an offline facility make this software efficient for users. You can translate text, images, and screenshots from digital devices.

Most importantly, users are allowed to translate the conversation. It means you can convert audio into multiple languages. For accurate word phrases, users can listen to their translation by an AI speaker. It helps to transfer your translation message to others. Microsoft Translator also supports audio sharing with third-party apps.

It May Be Helpful For You

Emerge Media is the owner of iTranslate applications. This software was first launched in 2011. Now the application has more than 500 million downloads worldwide. This app offers 100+ languages for instant translation.

You can listen to the language differently and with an authentic accent. Besides, there are several features available on this translator app. Most popular are translation history and fullscreen view for appropriate usage.

Jesse Maddox is the founder and CEO of the triplingo translator app. besides converting text; this fantastic software also includes multiple languages, dictionaries, quizzes, and audio speakers. Both Android and IOS users use this software.

Most importantly, you get a calculator, currency converter, and instant voice translation in multiple languages. Tripling also offers paid features like a live human translator.

This function allows you to translate a language with an accurate accent.

A US-based startup founded this translator software in 2009. SayHi is the lightest translator app on this list. Less than 11 MB is required to install this application. This fantastic software is known for fast and efficient performance for quick translation.

Multiple languages include English, Spanish, French, and others. This is a free application that is easily downloaded from the play store. Users who run low RAM devices should go for this translator app.

This is a South Korean-made translator app. Naver is the company that created this application for IOS and android. Most importantly, users from Asian countries can use this tool happily.

Papago offers common Asian languages like Japanese, Korean, Chinese, and others. Unlike other popular translator apps, Papago also offers multiple features in its service. The most common are text translators.

Users who want to perform visual translation should carry this fantastic tool.

Textgrabber is primarily used for printed copy translation. It helps you to convert image texts to multiple languages. Indeed, this app offers a quick scanning AI that enables accurate translation for printed copies.

Everything can operate by real-time scanning with the camera. More than 100+ languages are available to translate. Besides, you get a 10+ languages download facility for offline use. This application helps to share converted copies with others.

This translator app was founded by a Russian company called Yandex. More than 90 languages are available in this software, which can be used in a text, images, and conversation translation. Besides, you get a dedicated dictionary for specific languages.

You can save your favorite languages or download them for offline use. This is an android based application for users.

Gereon Frahling and Leonard Fink are the developers of this translator app. Linguee is known for its easy-to-use UI. It helps users to operate this software without any hustle.

Dozens of languages you found in this application. Most common are Russian, Chinese, Japanese, Italian, Dutch, Spanish, French, German, Portuguese, and others. This app also includes an editorial dictionary capable of answering complicated queries.

The top of this app has a search bar to find multiple translations from the internet. Both online and offline facilities are available in this app. “Best Translation App For Android in The World”

This is a Chinese application created by “Translate Abroad, Inc”. Both free and paid versions are available for this app. Waygo camera features enable it to quickly scan translation to convert the text into specific languages. You can check pictures, phrases, copies, and others.

Waygo has an accurate pronunciation for speakers to understand words. This is an excellent app for users who belong to Asian countries.

Naver Papago has a real-time translation facility for quick phrase conversion. Accurate pronunciation speaker with a meaningful dictionary. Users can also scan image texts with this app. You can translate any word phrase and convert it into multiple languages with a single click.

So above are the 12 Best Translation App For Android in The World In The World. For proper and efficient usage, we suggest googling translate and Microsoft translator because these apps have easy-to-use features that anyone can operate. Regional-based translation users can go for Dictionary Linguee, water, and other software.

I hope you liked our article Best Translation App For Android. If you have any queries related to our blog post then you can ask your query in the comment section below.